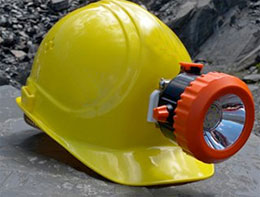 The Ontario mining industry in the mid-70’s faced accident rates higher than any other industrial sector. In 1976, there were 19 fatalities, 12.5 lost time injuries (LTI’s) per 100 workers. Wildcat strikes by miners in Elliot Lake and considerable political pressure on a minority government, led to the creation of the Royal Commission on Health and Safety of Workers in Mines. It was headed up by Dr. James Ham, an engineering professor from the University of Toronto. The report, known as The Ham Report, was tabled on June 30, 1976 and it changed the occupational health and safety system in the province of Ontario – and not just for the mining sector.

On October 1, 1979, the Occupational Health and Safety Act came into force. It applies to all workers in Ontario with the exception of workers under federal jurisdiction. By looking at the evolution of the mining industry, in terms of health and safety, we can see that this old and yet still strategically important industry, can teach us how to build a better future for occupational health and safety in Canada’s workplaces.

Dr. James Ham is arguably the father of occupational health and safety in Canada. He coined the concept of “Internal Responsibility System” (IRS). Although it is a term that was defined in the Ham Report, and it has been honed over time in practice. It can be defined as follows: The internal responsibility system is a safety management system that outlines clear roles and accountabilities for workplace parties with direct and contributory responsibility for health and safety. The following diagram shows the various workplace players and illustrates the concept. 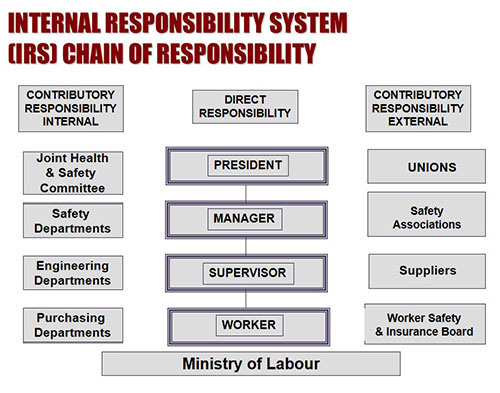 While IRS is at the foundation of Occupational Health and Safety (OHS) legislation, federal and provincial, there has always been controversy in its definition. In 1990, while I was chairing the Provincial Inquiry into Health and Safety of Workers in the Pulp and Paper industry, I heard from Dr. Ham in testimony. The IRS diagram at the time had the Ministry of Labour as having an external contributing role. He corrected that notion. Government must not be seen as part of the IRS but as an external “check on the system”. Of course, without a strong enforcement component, without a strong “check in the system” the system eventually collapses. Orders by Ministry of Labour inspectors are issued and complied with, but if their orders aren’t or if there are contraventions that lead to critical injuries or fatalities, penalties are severe: $500,000 per charge for corporations. For individuals, it is up to $25,000 per charge or 1 year in prison.

One misunderstanding of the IRS is that mandated health and safety committees carry the primary responsibilities for health and safety in a workplace. In fact, the system ensures that all parties have roles: some direct and some indirect or contributory. Joint Health and Safety Committees have an important role as the internal check on the IRS and on workplace safety.

In April 2007, the International Association of Labour Inspectors Conference met in Toronto for the first time in North America. 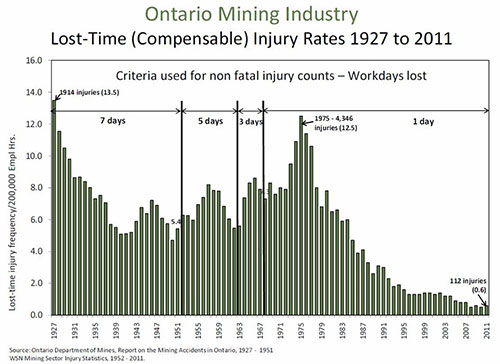 How did this happen? At the time, three reasons stood out: improvements in technology, mandatory training for all workers and supervisors (the only sector at that time) and tripartite solutions: defining IRS, Joint Health and Safety Committees, Mining Legislature Review Committee, and training standards development in a consensus model with agreement from labour, industry and government.

Workplace culture is an important aspect of productivity and profitability. It is also a primary reason why some sectors and some companies have exceptionally low injury rates. We can consider the SARS case: Justice Archie Campbell suggested in his report on the SARS Inquiry in December 2006 that the health care sector lacked basic safety culture and workplace safety systems. The report revealed that training in occupational health and safety is not a mandatory subject for nurses at Ontario’s colleges and universities. The accident rates in that sector remain higher than mining, when intuitively they should be lower. Since 2006, some, but very few, Ontario health care facilities can boast that they are as safe as is the mining industry.

In most mining operations, lost-time injuries, medical aids, and even near-misses are tracked, and continuous improvement systems ensure that a road to zero harm is laid out. If you think that the holy grail of zero lost-time injuries is unachievable, last year’s national winner of the John T. Ryan Award for excellence in mining safety, Kidd Creek Mine in Timmins, Ontario, achieved a zero LTI rate in 2012.

What about your organization? Calculate what LTI’s cost your company in direct and indirect costs. Calculate what risks are imposed if there is a chance for a fatality, and who will be held responsible.

Basic to good management is a competent safety management system. Mining, a very old and usually reputed “dangerous” sector, has shown that the road of zero harm is possible and all accidents can be prevented.

Vic Pakalnis, P. Eng., MBA. M. Eng., is the President and Chief Executive Officer of MIRARCO Mining Innovation. He received his mining engineering degrees from McGill and an MBA from Queen’s. He has over 30 years of experience in occupational health and safety at the Ontario Ministry of Labour. He served as the Amethyst Fellow at the Queen’s School of Policy Studies and as the Kinross Professor in Mining and Sustainability at the Queen’s Buchan Department of Mining Engineering. In 2012, he relocated to Sudbury to head up MIRARCO Mining Innovation at Laurentian University, Sudbury.