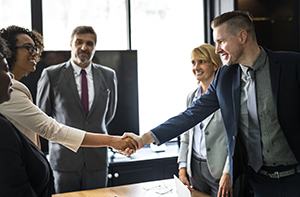 I was a professional Fire Fighter in the International Association of Fire Fighters (IAFF), for many years before I got directly involved as a member of our Local’s negotiating team. Although I was always interested in our Association’s activities, and I regularly attended meetings, I never considered myself “involved enough” to run for any committee or executive position for those first 15 years of my career.

I’m not certain that there was any particular event that piqued my interest in becoming a member of our Local’s negotiating team, but I was frustrated over the regular cycle of failed negotiations and expensive interest arbitrations. It seemed to me, from the outside looking in, that history kept finding a way of repeating itself and that perhaps I could bring about some change to the process of negotiations.

As a newly elected member of our Local’s negotiating team in the mid 90’s, I eagerly approached every opportunity to learn about the issues and process as we approached a fresh round of negotiations. I was immediately taken aback with how often the question of “why are we doing that” or “why are we asking for that” was answered with “because it’s the way we’ve always done it.” It made no sense to me. The way we had always done it typically led to an impasse and, with strikes and/or lock-outs prohibited, we were then on to interest arbitrations. The inability to negotiate our own deal came at a great cost for our Local and municipality from both a financial and relationship perspective.

Public sector negotiations in Ontario were particularly contentious during these times, as the social contract years were coming to a close. The ruling provincial NDP government had frozen public sector wages in 1993 and labour organizations at both the provincial and municipal levels were anxious to make up for lost time. After suffering through several years of a wage freeze, the experienced members of our negotiations team were ready for a tough fight and the battle lines were drawn. Both sides took a hard-lined, principled approach to bargaining. I was puzzled by the lack of real communications and found the experience to be extremely frustrating.

After two rounds of negotiations on the Association’s side of the bargaining table, and before I could affect any change, I was promoted into a Senior Officer’s position and soon found myself on the other side of the table, as a member of the City’s bargaining team. Much to my dismay, I quickly discovered that I was right in my assumptions and that my new team utilized the same tactics and functioned under a similar philosophy to the Association’s. Both sides were stuck in their old ways, unwilling to change regardless of the cost. Intelligent, well-intentioned people were unable to change, in spite of the fact their battle-tested ways were not producing positive results, and had not in a very long time.

Yet who was really winning? Each side had wasted hundreds of thousands of dollars over the years, only to have their collective agreement re-written by a board of arbitration. Decisions on business operations and the good and welfare of the employees were being made by a third party. Neither side was determining their own destiny, nor were they seeing their real interests met. No one was truly winning.

Benjamin Franklin has been credited with first coining the phrase, “The definition of insanity is doing the same thing over and over and expecting different results.” It was an insane notion to believe that repeating our same mistakes year after year would yield a freely negotiated collective agreement when it had so rarely done so in the past. While I’m pointing the finger at my teammates, it’s important to note as well that I wasn’t blameless. Over the years, with time spent on both sides of the table, I had picked up bad habits that were inhibiting me from effectively negotiating. Therefore, I took it upon myself to start the change by first altering my own bad habits.

I began by participating in seminars on successful bargaining skills. I read books and articles and finally had an opportunity to attend the Negotiation Skills program at Queen’s IRC. I came away from the program convinced that an interest-focused approach to bargaining was the ticket to successful negotiations and the key to breaking the bad habits back home.

Having sat through an interest-based bargaining seminar that was poorly received, while a member of the Fire Fighter’s Association Executive just a few years before, I knew that I could not walk in and change things overnight. I also felt that I could not announce a change in strategy. Instead of labeling the change as a shift to an interest-focused approach, I choose to subtlety introduce the changes, first in the preparation of our proposals and then at the bargaining table.

I am not going to pretend that the transformation was easy or that we found instant success. However, we did successfully freely negotiate a collective agreement, on our own and without third-party intervention, during our first round of negotiations. As hard as old habits are hard to break, we proved it is not impossible. Our negotiating styles on both sides of the table have gone through a subtle transformation and we have successfully negotiated 12 consecutive years of collective agreements.

I have also witnessed a positive change in the day-to-day relationship between our senior management/HR team and the Association executive. A thorough review of the issues discussed at our regular labour/management meetings is a great way to prepare for an upcoming round of collective bargaining.

What was broken; appears to have been fixed!

Andy holds Queen’s IRC Certificates in Labour Relations, Advanced Labour Relations, and Organization Development Fundamentals, and he participated in the program on negotiations at the Harvard Law School. Andy holds a Bachelor of Science degree and has also studied at York University and the Ontario Fire College.Andy MacDonald was a member of the executive of the Brampton Professional Fire Fighters Association (BPFFA), IAFF Local 1068, for many years before joining the management ranks. He is currently the Fire Chief with the City of Brampton, Ontario. While a member of the BPFFA executive, Andy participated in collective agreement negotiations and gained the union’s perspective. As a member of the negotiating team on the other side of the table, Andy now plays a key role as a chief spokesperson of the Corporation’s bargaining team. Andy’s insight into negotiations from both sides of the negotiation table gives him an interesting perspective into the dynamics of collective bargaining.

He spends much of his free time aiding in many charitable causes and was the driving force behind the construction of his dream, the world’s first Fire/Life Safety Education Centre in Brampton. Andy’s other charitable exploits include rappelling off the CN Tower in 1985 to raise money for a Toronto burn unit, earning him a spot in the Guinness Book of Records.