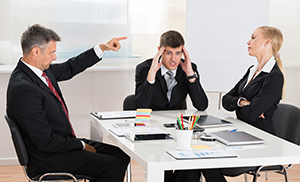 With thirty years of experience working in a unionized environment, I have observed a variety of collaborative relationships between employer and union. Much of my career has been spent helping to evolve the management-union relationship from confrontation to collaboration. I was directly responsible for nurturing and supporting this relationship for six years, from 2000 until 2006. I served as the Central Union Management/ Staffing Liaison Officer for the Government of Saskatchewan. The Government of Saskatchewan and General Employees Union (SGEU) jointly funded this position. In this article, I share my insights on the collaborative relationship.

The Collaborative Relationship: Why Bother?

The management-union relationship feels like an arranged or forced marriage without the option of divorce. You’re in it together, so you might as well try to get along and perhaps you can find some commonality of interests for the betterment of the workplace. If the collaborative approach is to be effective, there are some things to take into consideration:

In my opinion, there have been different forms of collaborative relationships that have achieved various levels of success and failure throughout government during the last few decades in Canada. The newest are the lean initiatives, which primarily identify efficiencies in work processes. This is done by tapping into the knowledge of the organization’s employees. This process uses mapping and is able to identify cost savings through increased use of mathematics and charts. The common thread amongst the collaborative approaches is a process that allows for input from its employees. This input is sought prior to making decisions, so it enables the employer to make more informed and effective decisions.

In order to move towards a more collaborative relationship:

From Confrontation to Collaboration

Promoting the collaborative relationship is much like fostering and supporting an infant in the early stages of development. Continuous support and open, frequent communication is required early in the relationship and will assist in building trust between the parties. This scaffolding, or support, will diminish as the relationship ages and levels of trust are established. There may be an inherent level of distrust from the many years of participating in the confrontational environment. This may be difficult to overcome and will only be successful if the commitment is demonstrated from upper management. Senior-level management will need to take the initiative to instruct and convince the middle managers of the benefits and the potential for administrative savings that could result in this type of relationship.

A consensus decision-making model ensures that there is no eroding of authority from either side of the relationship. In a consensus decision-making model, consensus must be achieved prior to implementing any changes. Management must operate the business, so if there is no consensus on a decision that has to be made, then management may make it without the involvement of the other party. This is used to keep both parties engaged in the collaborative relationship until all options are exhausted. It is acceptable not to use this process for all the issues, but rather, decide which ones might be solved using this approach.

Union representatives and the membership will have to enjoy some benefits from participating in the decision-making process. It is best to start with some non-controversial issues, where benefits can be easily obtained. It is important to celebrate successes in a very public way, as this promotes union acceptance of the new relationship amongst its membership. Trust is very fragile and there is a need to place special emphasis on communicating frequently with the union and management. This builds a level of trust incrementally with the union and vice versa. Any disputes or disagreements will need to be worked through quickly and management needs to explain clearly why a union’s desired change might not be possible. Trust is crucial to establishing a solid foundation on which to build the desired collaborative relationship.

In order to sustain this relationship change, there will need to be successes achieved. For instance, if management presents organizational financial reports and affords the union the opportunity to ask questions, this creates a forum for providing information. If the union has the opportunity to understand the pressures and demands the corporation is facing, then the parties can discuss issues of mutual concern, while at the same time not yielding any of management’s authority. These are simple things that do not require a lot of resources, but demonstrate a change in how management functions.

This is an example where the union can demonstrate its commitment to the relationship, but not yield its authority obtained through collective agreements. For example, a Department/Ministry in government was in a position where they were overstaffed, due largely to equipment efficiencies obtained through a new fleet of snowplows. Several locations were no longer needed and employees were going to be out of work. The decision was made to hold a draft, based on seniority, to choose locations and positions to be transferred, when employees’ positions were affected. The employer agreed to transfer employees to the chosen location and provide all benefits under the collective agreement. Thus, this agreement did not infringe on the union rights and the employees’ period of uncertainty regarding their future employment was drastically reduced. This lack of job security may cause unrest for months within the organization, negatively affecting employee morale and productivity. The draft was held and all decisions were made within two days, through a jointly developed committee, using the interest-based, problem-solving process. Both sides reaped significant benefits, while incurring minimal costs in terms of money or authority. This is an example of the potential that a well-established collaborative relationship has in the workplace.

Another example of the benefits that can be achieved is related to the issue of accommodations made for injured workers returning to the workplace. The union and the employer may experience frustrations regarding injured workers’ prolonged absence and delayed return to active employment. The union may advance grievances, due to a lack of accommodations for its member or a member filing human rights complaints. The employer might incur the perceived liabilities surrounding the grievances/human rights complaints and have no mechanism for accomplishing a successful return to work from injury. In an actual case, the employer and the union worked on this issue jointly from 1997 until 2000. During the collective bargaining, the joint committee recommended language to the parties of the collective agreement that was eventually included in the collective agreement. The language allowed for superseding of normal staffing provisions to enable qualified employees on adjudicated injury/disability claims first access to vacancies over employees with more seniority. In exchange for this provision, once the employee provided medical clearance to return to work, the employer had six months to find a suitable accommodation or to begin to pay the employee’s full salary until a position was found. This involved balanced concession on both sides to put these provisions in place. These were leading-edge provisions at the time, still exist today, and have resulted in both the employer and employees enjoying better provisions for injured workers.

As with most initiatives that promote change, there will be some individuals who will not be in favor of the change. If you fail to understand this and do not put strategies in place to minimize the negative influences and pressures, the collaborative relationship will not survive.

Collective bargaining becomes more continuous through this process, particularly when it leads to improvements in the workplace. It is, however, extremely difficult to bargain monetary improvements, as the two parties have divergent interests in this regard. When there are opportunities to discuss non-monetary issues, quite often the discussions produce a result that neither party envisioned prior to examining the issues to be negotiated. A solution reached between the parties is almost always more desirable than one imposed.

In the collaborative environment, the participants play a very important role. They can be either direct contributors to the success or directly attributed to the failure of change in their relationships. Union elections do not always produce the most capable participants, as there are no minimum qualification thresholds in place. Education for the participants should be detailed and ongoing to ensure the participants are fully trained. As long as the union membership and management commitment continues, so does the evolution of the relationship. The success of this relationship will need to be celebrated to ensure continued support.

Canadian values are such that the majority of people prefer collaboration to confrontation as an approach to resolving disputes. To enjoy long-term success, organizations should include some form of collaboration in their working relationship with its employees. This assists in developing a fully engaged participatory workforce for the 21st century.

Rod McCorriston started working for the Government of Saskatchewan in 1982 as an Equipment Operator for a Department/Ministry. He was elected to the Public Service Negotiating Committee and was responsible for bargaining the 1994-97 and 1997-00 collective bargaining agreements. In 2000, he was afforded the opportunity to perform work as the Central Union Management Committee/ Staffing Liaison Officer during the next six years. After this experience, he began his current career with the SGEU. He has held several positions with SGEU; as a Long Term Disability Advocate, Staff Representative, and his current role as Director of Labour Relations. Rod is also a recent graduate of the Queen’s IRC Labour Relations Certificate program.