Best Practices for the Union-Management Relationship in the Workplace 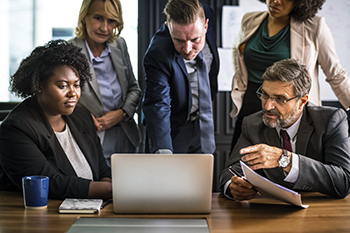 These are challenging times for public-sector finances, private-sector growth in a sputtering economy, and hard conversations at the collective bargaining table.  With so many issues on the macro level, we sometimes lose sight of the day-to-day working relationship for all of our employees and bargaining unit members. For the vast majority of unionized and non-unionized workers, it is the day–to-day interactions that determine whether the workplace is a productive, engaged environment, or one that preoccupies everyone with conflict, grievances and problems. Where each workplace falls on that spectrum will largely determine productivity, quality, absenteeism, as well as retention and recruitment. In other words, success often depends on what we do each and every day in the union-management relationship.

To achieve a healthy workplace that leads to commitment and engagement, there are some important best practices that can be implemented, jointly, by the union-management partnership. Consider some or all of the following five best practices for managing in a unionized workplace:

1. Joint Training for Supervisors and Stewards

There is still a common mindset among management that once an employee is elected to the union, they now work for somebody else. Nothing could be further from the truth. The reality is that companies train their employees year in and year out – skill building is one of the best investments in the workplace. Yet union stewards and members of the executive do not cease to be employees when they take on a union role. In fact, they are even more engaged in the success of the business than they were before, now being responsible for hundreds, if not thousands, of employees/members. So, why wouldn’t the company consider their training just as important as any other workplace role?

Some of the most effective training that supervisors and stewards can receive is how to resolve issues at the front line.  Skills-based training on joint problem-solving and conflict resolution can pay major dividends for both the company and the membership when stewards and supervisors are skilled at identifying and working together to resolve issues. As part of the training, both parties should be then expected to address issues at the front line, and not simply pushing them into the grievance process that often results in delays, simply because the front-line interface is ineffective.

Another area for joint training for supervisors, managers, stewards and the union executive, is on the fair and appropriate application of discipline. Discipline is poorly understood and even more poorly applied in many workplaces, resulting in anger, frustration, disengagement and inappropriate behaviour on both sides.

A transparent, fair, and clear discipline process that is jointly understood and applied benefits everyone in the workplace, including individuals who may indeed receive it. Most importantly, discipline should be preceded by clear discussion and engagement with the employee wherever possible and appropriate, to minimize “surprises”. After all, properly applied discipline has only one purpose – to change and align behaviour. Almost everyone, when treated fairly, will make the changes required.  And when the union and management are both applying the process fairly – and holding each other accountable – everyone benefits.

By training all leaders in the workplace on the proper and effective use of discipline, and with all leaders knowing and understanding the process, formal discipline will be what it is supposed to be – a last resort, not the first action taken.

Most workplaces have some version of a labour-management committee (LMC), or an employee relations committee. Regardless of the title, it is a forum for raising and addressing issues on a regular basis.

If your LMC doesn’t have operating principles or guidelines, it will not be as effective as it could be. Many LMC’s become dysfunctional very quickly, simply because the two parties have different views on the purpose and running of the committee that quickly degenerates into conflict. One of the first steps an effective LMC should take is to establish joint operating guidelines that will help ensure the committee’s success. The collective agreement often defines who attends, how many from each side, and how often the committee must meet. That is a start, but nowhere near enough structure for the committee to succeed. A better approach and framework is needed.

For example, some common operating principles, beyond those mentioned above, may include:

Communicating is simply not enough.  In today’s environment, over-communication is the order of the day.  No one in labour relations likes to be surprised, on either side. When addressing issues, make a joint commitment to keep each other in the loop, discuss expectations of confidentiality, and never let your partner end up with egg on their face. They’ll simply be frying up a new omelette to return the favour. With clear and simple guidelines, both parties can stay in the loop without disadvantaging anyone, nor either party feeling like they have given up their autonomy. A healthy union-management relationship pays many more dividends to both parties than “tricking” or surprising the other party ever did.

For any important workplace issue, management and their union(s) should look toward joint communications, wherever possible.  For example, after finalizing a new collective agreement, the parties should jointly communicate the changes and the rationale behind them. Often, each party communicates to their own stakeholders – management to supervisors, the union to stewards and perhaps their membership. The problem, of course, is that they frequently communicate different messages, setting the workplace up for immediate conflict and grievances. The process of jointly crafting the information and messaging often helps the parties better apply the new language in a fair and direct way. Other areas include changes to legislation, significant workplace changes, policy changes, etc. Both parties will benefit far more from joint communication to employees/members than they ever will gain by putting significant “spin” on it in their favour.

Labour relations is an ongoing process of change, more so now, it seems, than in the past. Major issues such as demographic change, changes in attitudes toward government, international trade, retirement, and types of pension plans are the new normal across Canada. By aligning management and union processes in the workplace in all areas where there is mutual benefit, we all help create healthy and more sustainable workplaces for the future.

Gary Furlong has extensive experience in labour mediation, alternative dispute resolution, negotiation, and conflict resolution.  He has delivered collective bargaining negotiation skills training for both management and union bargaining teams across Canada, bringing a strong focus of effective and collaborative skills to the table. Gary also conducts relationship building interventions to strengthen day-to-day union-management effectiveness away from bargaining. He has worked with a wide range of companies in the private sector, in the public sector with municipalities, provincial governments and the federal government, and with unions including Unifor, Teamsters, CUPE, ONA, OPSEU, and PSAC. Gary is past president of the ADR Institute of Ontario, is a Chartered Mediator (C. Med.) and holds his Master of Laws (ADR) from Osgoode Hall Law School.  Gary is the author of The Conflict Resolution Toolbox, John Wiley and Sons, 2005.

Check out the Queen’s IRC Managing Unionized Environments joint training program to learn more about managing the day-to-day relationships within a collective agreement.