4 Steps to Fix a Toxic Workplace 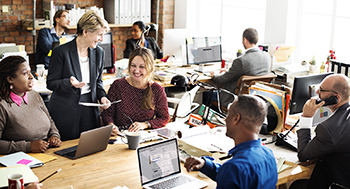 How do you fix a hostile workplace after a strike, merger or other polarizing event? How do you create a healthy workplace after a harassment or grievance investigation? It can be difficult to rebuild the trust that has been lost between members of a team or in leadership, or both. But, according to Anne Grant, a Queen’s IRC facilitator and workplace restoration specialist, you have to bring people back to a joint vision of what the workplace should be.

Is Your Workplace Toxic?

According to Anne, a toxic or poisoned workplace is a work environment where the work product is being affected by the dysfunction of the members of the team. Some signs and symptoms of a workplace that needs help could be an increase in grievances or sick time; it could be more people quitting or retiring; it could be difficulty in recruiting and retaining talent. But there are also more subtle signs, like apathy among workers or an increase in gossip or bullying.

“We have all kinds of processes for addressing a complaint,” says Anne. “But we don’t have as many processes for getting back to an ideal workplace after a complaint or polarizing event like a merger, strike or perhaps a big investigation.”

Sometimes assumptions are made that are not quite correct, so the first step is always to find out what the actual issues are by talking directly to the staff. It could be dysfunctional team relations or team behaviour, which could include malicious gossip, bullying behaviours, or perhaps some members of the team just not getting along.  Another issue that often comes up is challenges with management practices. There may be a perception of favouritism, that management isn’t managing the workplace or that there’s a lack of planning. Perhaps there’s the perception of unfairness, that management isn’t managing the negative performers or correcting unacceptable behaviour.

A key part of the assessment piece is to communicate the process and be clear that it’s not an investigation. Perhaps a memo that says: “We have recognized that there are some challenges on this team. We are going to be doing a workplace assessment starting on this day. You will be able to complete a confidential survey and/or attend a confidential interview. Then the survey results and our plan will be released at a meeting next month.”

When completing the assessment, you might find that there are operational or technical issues, but most likely, you will find that there’s a lack of trust and communication.

Anne worked with a group of public works employees who drive snow plows. The initial information was that: “Oh, there’s a couple of guys, and they don’t get along with the new guys. It’s a millennial thing.” However, as she dug into the issue and spoke to the employees, she found that one of their biggest issues was that they didn’t feel like there was a plan for their department. They felt like everything they did was at the whim of the manager. George said: “You know, Frank and I are the only two guys that can drive the grader, and we’re pretty close to retirement, and we don’t see the plan for who’s going to get to drive the grader next.”

In Anne’s example above with the snow plow drivers, the discovery of the real issues led to the development of a skills inventory being posted, so the workers knew who was certified to drive different pieces of equipment. It incorporated the seniority list, so it had senior employees at the top and junior employees at the bottom. Everyone could see who had what certifications, and then it could be used to plan who would be next to get training. Going straight down the seniority list wasn’t working, because George and Frank, who were at the top of the list and were the most senior guys, were going to be gone in the next year. The next person on the list, Sam, was already was certified in two other areas, and it didn’t make sense to certify him in the grader because he could only drive one piece of equipment at a time. Identifying some tangible issues meant that they were able to make an effective plan to work towards a more ideal workplace.

This is where the rubber hits the road in the process. Many times, organizations do the assessment and planning pieces, but the recommendations never get implemented.

One of the ways that a workplace restoration differs from a grievance investigation is that it’s not about disciplining the rogue employee(s) or manager; it’s about identifying what the ideal workplace looks like for that team, and figuring out how to make it happen.

A big part of the implementation is communicating to the staff what can and can’t be done, and why. “We’re going to do this this month. We’re going to do that next month. That recommendation that you made, it’s a great idea, but because of the regulations for our industry, we can’t implement it.” The workers need to know that they have been heard. Treating them like partners will help motivate desired behaviour.

Anne says while it’s important to acknowledge the injury in order to heal and move forward, the focus has to be on the ideal workplace and what steps can get you there. A key part of that process is education – it’s a good opportunity to remind people of expected and substandard behaviour, without blaming or singling out individuals. “One of the issues that was reported in the survey is some substandard behaviour. There’s noncompliance with our organizational code of conduct or with the Occupational Health and Safety Act.”

Anne recalls a workplace restoration experience at a coal yard. There were many complicated issues, but one of the workers said: “We need a Tim Horton’s down by the lagoon.” It turned out that a bunch of these guys worked outside down by the lagoon all day, with a Johnny on the spot and no access to a cafeteria. Everybody up in the main building had access to hot coffee, a cafeteria and real bathrooms. One of the things that they were able to implement as part of the workplace restoration was getting a coffee truck to come down to the lagoon at 9:00 in the morning and at 1:15 in the afternoon to sell them hot coffee. While there were big issues that were not easily fixed, this small step made the workers feel like they had been heard and contributed to creating a more ideal workplace. The coffee truck was bringing more than caffeine. It was bringing good will.

The final part of the process is a check-in. Anne recommends an evaluation in three months, six months, or a year, depending on the situation. This reminds the troops that their leaders haven’t forgotten about them, and it continues to engender trust and engagement from the staff. It also holds everyone accountable for maintaining the new processes and expected behaviours. People fall off the wagon after a while, and by completing an evaluation, it holds all parties accountable.

Queen’s IRC has introduced a new Workplace Restoration program, which will teach you how to address a toxic workplace to rebuild relationships and productivity.